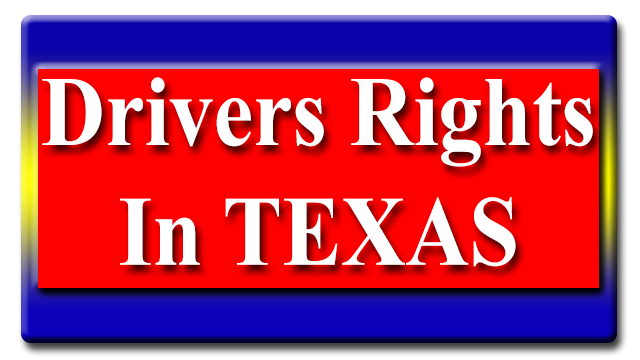 Understanding Your Rights as a Driver

There are three important things to know if you’re a driver and are pulled over by police for a traffic violation or for suspicion of Driving While Intoxicated.

In the event you’re ever stopped by a law enforcement agency in Texas, Houston, League City, Or Galveston, you have at bare minimum, all the rights specified in the following list.

There are a few things that you must do if asked by a Houston, Galveston, or League City, TX area police agency’s officer. If a law enforcement officer asks you for your name, current address, vehicle registration, proof of insurance, or drivers license, you must comply by law and provide the information being requested by law enforcement.

Use Your Head During DWI & Other Stops

When lawfully refusing to cooperate with the police goes south, its usually because of a bad attitude or a condescending nature towards the officers on the scene on part of the detainee. Don’t act belligerent with police as it will make matters worse. Think police brutality.

Whether legal or illegal, any police response to a citizen with a bad attitude is guaranteed to turn out bad for the alleged offender. This is usually the root of evidence planting, false arrests, arrests for disorderly conduct, and in the worst of case, the implementation of police brutality.

Police are people too, and they make mistakes quite often. The last thing you need is to become a victim of edging on a loose-canon type of officer. While we respect police and know that most of them are upstanding citizens in their own right, there are other cops out there with no morality who wouldn’t think twice about slamming your head into their vehicle on “accident”.

If you’re ever arrested for a criminal offense involving murder, drugs, vehicular manslaughter, Driving While Intoxicated, DWI or DUI, contact a lawyer with an impressive resume or ask around to see if anyone you know may know of one who can represent you in the court of law.